Sowmini and I decided to go as soon as I saw that Bangalore was hosting a Comic-Con event. My room-mate Jadine initially wanted to come too, and as two avid Whovians (Doctor Who fans for those muggles who aren’t so excited by a certain blue box) we entertained the idea of going as different aliens. 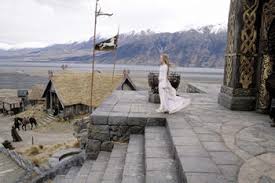 Jadine couldn’t make it in the end though, and Sowmini and I were left to fend for ourselves. Then I had it! Why had I never thought of doing Lord of the Rings cosplay before – ever since the films came out (now so long ago) I’ve wanted to be Eowyn…ahem, I mean dress as Eowyn.

So we took a trip to the claustrophobic streets of Shivaji bazaar last weekend in search of fabric and haberdashery. Very pleased with our purchases, we took the stuff to every tailor near to the office in Lingarajapuram, only to be rejected again and again. Turns out most tailors only want to make salwar kameez.

We did manage to dig out a good one back in the depths of the market however, so all was not lost. Late on Friday night, after promises of delivery and wasted trips to pick up items when they weren’t ready, I finally got to view the finished outfits. They looked fantastic. He did such a good job with Eowyn’s dress, and it fit perfectly.

Me in my Thor costume

Our fellow volunteer, and Sowmini’s friend from college, Prarthanna decided to join us at the last minute, so the three of us spent Saturday morning getting ready at my place. We pinned Sowmini’s hair with some silver anklets, and voila – she was Arwen! I rooted out a blond wig from a shop near the apartment, and one more cosplayer – Eowyn-maybe-Heidi. Luckily I’d kept hold of my costume made for the marathon, so Prarthanna donned her papier mache helmet with polystyrene wings, her red curtain cloak, and chainmail top – one Thor!

Comic-Con itself passed in a blur. It was so crowded and hot inside the stadium, moving through the narrow channels was like being part of a shuffling human caterpillar that didn’t know which way to turn its head.

There were stalls full of temptation on every side. I almost cried when the ATM refused my card, and I was forced to choose between House Lannister, House Targaryen, and House Stark in buying a sew-on patch. Obviously being Northern and proud I opted for the direwolf.

Then there was the Abigail-heaven-but-I’m-too-poor-stall selling steampunk pistols and replica lotr swords; a gandalf hat and even Sauron’s mailed hand with the One Ring! *fangasm* I couldn’t afford the 5000 rupee price tag though, so moved onto registering myself for the cosplayer competition and got some over-priced food.

Sowmini and Prarthanna had retreated to the stadium benches by that time. They were definitely not used to being constantly harassed and asked for photos. I think at least 20 people must have asked whether I was Daenerys Stormborn, simply because of the wig. I had a couple of “Are you Rapunzel?”s and even one “She’s Snow White!”. Yes, because they look exactly the same.

There was a girl there as the dragon-queen, with a home-made egg, but the guy who won our category was painted up as Darth Maul. A bit uninteresting in my opinion. Why be Darth Maul when you can be Hans Solo, or Jabba the Hut? He didn’t even have the correct colour light saber!

The guy who won overall had a fantastic getup though. He’d spent four months preparing his fully articulated Iron Man suit, and he’d even wired up bulbs in the palms to get the real light effect. Each piece moved individually. Everyone was yelling his name before they announced the winner, he really deserved to win.

Finally, we headed home. The day had been awesome. That night I went to bed far too late with a browser full of steampunk ideas, just waiting to burst into creation. Might have to make a visit back to that tailor.

So rather than starting from where I left off after another extended absence, I’m instead going to fill you in on recent events.

Today I ran in the Bangalore 10K Marathon with the other SICHREM staff and volunteers, though we participated in the unfit people’s version called the Majja Run – just under 6km. Despite the relatively short distance, and the early start time of 8:30, it was still so swelteringly humid that repeated bottle tipping onto my own head barely staved off heat exhaustion. However, Sowmini (a fellow volunteer, and now my steadfast friend) and I did still run in stops and starts, with a dramatic sprint finish to full paparazzi and random onlookers.

Extremely pleased with ourselves, we sat down to a celebratory (and complimentary) pack of apple, biscuits, and plain bun(?) to recover. I’m impressed that I even managed to run at all, though my knees have been giving me the horrible feeling that tomorrow will be the time to suffer.

Before the race itself, we entered into the costume competition. Never one to pass up the opportunity to don fancy dress, I’d suggested that we gather the required 10 people to attire themselves along a certain theme, and aim for the 75,000 rupee prize. A week after the idea sprouted, several trips to Shivaji Bazaar, and two frantic days of glueing, sticking, papier mache-ing, and painting later, we emerged as the ‘Human Rights Defenders a.k.a. Avengers’. Each character had their slogan sign – “Right to Life”, or “Right to Education” – and looked pretty stunning up on stage at 7:30 in the morning.

Though we had an illicit DC member in the gang – Superwoman – we stuck to the Marvel Universe overall, with Silver Surfer, Wolverine, Black Widow, Hawkeye, Nick Fury, Hulk, Captain America (that plaster of paris shield look fantastic!), Loki and Thor, whom I played. The biggest compliment I received was from a little boy no more than six, who came up to me in the street when I was already wearing full helmet, armour, and cape, and asked, “Are you Thor!?” 😀

Now I’m just sitting at home nursing my aching calves, and waiting to hear the results.